Originally Posted on Her Campus

By the time you read this, a week will have passed since Valentine’s Day. I, however, am writing this at 11:30pm on February 14th. I’ve been awake since 8:30 in the morning, and my day didn’t quite go as planned. Sometimes life does that, and sometimes you just have to let it happen. This is one of those stories, I know.

My day began, running late and missing my mom and her heart-shaped Valentine’s Day pancake breakfast. I got to my only class of the day and found that a much-anticipated office hours meeting got cancelled. I finished class, went to the library to do homework and let the entire room hear my not-pancake-filled stomach growl when a nearby group began eating pizza. I went to work and sent a confrontational email that sort of made me want to throw up the food that wasn’t there.

I would not have considered anything prior to 6pm to belong on a “Good Day” list. Nothing was terrible, none of it was life-changing or heart-wrenching. I’m not on Grey’s Anatomy or in a Wattpad FanFiction. But it wasn’t a good day.

I was, however, repeating a good outfit I’d chosen the night before (red sweat-slacks—they’re real, I swear—a pink long sleeve shirt with ruffles, black booties, gold hoops with hearts on them). And, I did, however, have plans I was sort of excited for later.

Hope was not lost, only diminished a little.

So, like I said, I sent the confrontational email. Afterwards, I was to go on a Galentine’s Date with my roommate/co-worker. She and her boyfriend were in a weird place about Valentine’s Day, so she and I had decided to go out to dinner after work. I sent the email and begged her to leave the office immediately. I wanted to get my mind off the day.

Before we made it though, the first of a series of good things happens.

My boss answered the scary email. She understood all of the issues we’d been having and wanted to fix them, she confessed her love of us and the value we bring to the team. I was glowing. (I’m convinced all of the love languages apply to me, but in this instance “Words of Affirmation” was really pulling ahead).

Then, we walked through the Commons. There was a dog doing a photoshoot and the ducks were dressed in tutus. 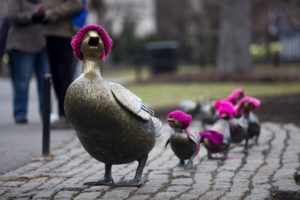 We arrived at our restaurant and another email from work came in. We’d just been signed with a new client, the email had lots of exclamation points and already fixed some of the issues my confrontational email had addressed.

Our food came. Two pasta dishes—carbs coated in the two most delicious sauces we’d ever tasted. There was a group of four old women drinking wine and eating bread at a table next to us.

We finished up and headed to another one of my places of employment, a nearby Ale House. My favorite bartender to work with was there, we sat and had two drinks on the house. We were tipsy, dressed thematically, and giggling about different cat videos we were finding.

There’s a quick uber home, and we found an Amazon delivery waiting on our doorstep. My mom had sent me a bouquet of flowers and a heart-shaped chocolate cake. Roomie and I were both overwhelmed by the cuteness of the gesture, and wandered to our front door. A few pictures later, we heard our neighbor’s dog running around in the hallway (one of the happiest sounds in the world).

We sliced up the cake and sat to watch one of the John Mulaney specials (“Comeback Kid” to be specific). Our cheeks were in pain from smiling and laughing so much. The ease of a good night set in. I realized I had to write this article, about some topic surrounding “Friend Dates,” and wondered: “Was this a good day? Does a lot of low-level bad still cancel out good? Does bad not matter since I’m not experiencing the bad now—is the only important emotion the one you’re currently feeling? What does a net ‘good’ day look like?”

Those last questions again. Is the only important emotion the one you’re currently feeling? And what does a net “good” day look like?

I don’t really have answers to them. As someone who’s struggled with mental health for my whole life (or, at least since 7th grade), I often look back on days and feel like they’ve all been basically neutral. Like the good and bad cancelled out, and I’m left with nothing.

These days, I’ve been doing a lot better, and I think my answer leans towards one of optimism. It recognizes the emotions you’re currently experiencing: my morning made me feel crappy, that doesn’t go away just because I feel good now. But I’m happy now and I should focus on that. It focuses on the good. A net “good” day is one that has good in it.

On the day of writing this, I wore an outfit I adored, I expressed my feelings and frustrations, I was productive, I was a good friend, I got to spend lovely quality time with that friend, I felt the joy that comes with seeing a happy animal, I felt love from my mother, I laughed more than I had in months. I made plans that I knew would make me happy, and I actually let them do their job even though I was feeling bad earlier.

Sometimes, that’s really all you need. Choose to fill your time, as much as possible, with things that make you happy. Follow through and let them work. Friend dates have always been a good way to fulfill that for me, find something that works for you.

It was a good day.