I got out of my Uber at precisely 6:30 pm on Tuesday the 22nd of January. It was 30 minutes until doors opened and there was already a line of girls stretching halfway down the block–despite the frigid weather.

These days, when you hear the name Jesse McCartney, the first thing you’re likely to think of is the debut song and/or album “Beautiful Soul.” Its lyrics skyrocketed Jesse into teen stardom at the tender age of 17, and left girls everywhere fawning over his sweet love songs. He was on the cover of every teen magazine, had cameos in everything from Hannah Montana to CSI, and I, for one, thought we were destined to be together. 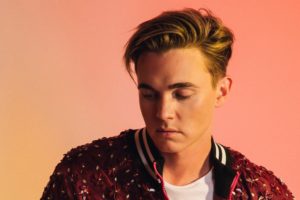 Unfortunately and for more reasons than one, I never got to go to a Jesse McCartney concert during his teenage peak. And by the time I was old enough to go to a concert, he wasn’t on anyone’s radar. I still own his first two albums, Beautiful Soul and Right Where You Want Me (both are named after title tracks), but other than listening to them for nostalgia’s sake, he mostly faded into the background. He became someone I loved when I was a kid.

That is, until a chance encounter with a brand new friend’s extra ticket. She mentioned offhand, on the Tuesday before, that she had an extra ticket to his concert for the following week and without question I jumped at the opportunity (maybe as a joke, maybe ironically, definitely not expecting to have a shockingly good time). For the days leading up to the concert, I got more and more excited, and more and more surprised by the giddiness. I was catching up on all of his newer music, including two songs released in the last year–“Better With You” and “Wasted“– and I was feeling the same fluttery love I’d had when I was little.

Come the night of the concert, I arrive and get in line with my brand new friend. It’s freezing out, but there’s an excited buzz running through the crowd that’s enough to make me forget about the toes I couldn’t feel. We get inside–general admission–and end up at a spot mid-floor. We’re not touching distance, by any means, but the stage still looks life-sized and we can see over everyone’s heads (perk of going to a concert that is attended by 90% women: you don’t have much trouble with super tall people in front of you).

The lights dimmed, the opener came on. The lights came back up and we waited, murmuring, for half an hour. The buzz was growing, and got stronger with every signal that Jesse was coming out soon: someone testing the drums and guitars, a new mic stand getting placed front and center, the drummer coming out, the lights dimming again, the overhead music stalling. It was all building on top of the years of anticipation I’d felt revive since I bought the ticket.

Finally, 31-year-old, teen heartthrob, Jesse McCartney came on stage. The collective joy of the crowd was that of seeing your childhood idol in the flesh, because that’s exactly what we were all seeing. A sold out venue’s worth of women sharing the experience of pre- or post-pubescent adoration, as adults.

He kicked the concert of with the upbeat “How Do You Sleep,” filled the middle with equal parts throwbacks and new, unreleased-or-just-released songs, and then finished, of course, with the song that started it all: “Beautiful Soul.”

As for concerts I’ve attended, Jesse falls amongst a range from the pop/punk band Sleeping with Sirens, to other teen-heartthrob-now-grown-up, Harry Styles. I’m no veteran–this was only the sixth concert I’ve been to overall–but I can genuinely say that Jesse’s was the most fun I’ve attended.

His performance worked as proof of his 15-year career on-stage. He was confident and charming, he worked the crowd and gave us what we wanted (including some dirty jokes and dances that probably wouldn’t have been approved during his first tour), and maybe most surprising from a grown, teen pop sensation, his voice sounded the same as it did on recording–fantastic. His lyrics celebrated the women in the crowd, let us into his own relationships, and most of all, allowed us to celebrate him and his legacy.