My mother’s banana bread is all at once deeply southern and impossibly not: it comes from my paternal grandmother in rural Tennessee, and was changed by my more-Californian-than-Iowan mother; it’s mixed with a vintage Foley fork and baked in grandma’s loaf pans, with one-fourth whole wheat flour, and less sugar than  the original recipe calls for. My mom always makes two loaves—the original recipe with pecans (pronounced pee-CANS in the south) and one without, at my request. We could have used a simple recipe; but like the duality of its origin, this one is complex—full of secrets hidden between handwritten lines on a yellowed-with-age index card.

Mix bananas with a Foley fork—Do Not Blend.

Blending makes the bananas textureless, too liquidy; they sink to the bottom of the loaf pan and it becomes more like banana bread-pudding. Don’t take the easy way out. Do things by hand, they’ll turn out better.

Use buttermilk. If you don’t want to buy buttermilk, mix 1 tbsp of white vinegar per 1 cup of milk.

Just regular milk doesn’t work, you need the sour buttermilk to contrast the sugar. You don’t actually taste the sour, but it gives you a spot of relief. Take the sour with the sweet. And, there’s always another way to reach your goal.

You can’t mix it all at once, wet into dry; it’ll get too sticky. Be patient. Don’t do more than you can handle.

Bake at 375F for fifteen minutes, then reduce the temperature to 350F for another hour or so. Check every five minutes after the hour for doneness.

If you bake the whole time at 375F, it’ll come out burned; bake at 350F and it wont get golden. Don’t push too hard just to get it done faster. Don’t ignore things; they need attention to fully develop.

I suppose the recipe is complex, but the pleasure is simple. When done, it’s best sliced warm with butter melted over it.

While baking banana bread is not exclusive to Thanksgiving, it reminds me of everything I’m thankful for, and when I make it I begin to relearn the lessons written into its steps. Do things by hand, take the sour with the sweet, be patient (but use the workarounds if needed), don’t push too much, be attentive, relish in the simple.

For a moment, or a day, or a season, I fall in love with what this recipe has given me: the simplicity of grandmother, and mother, and daughter—three generations all using the same pans. The complexity of cultural differences, in-laws, recipe changes, and cross-country moves. I fall in love with the lessons found in between the cramped cursive on that aged index card. 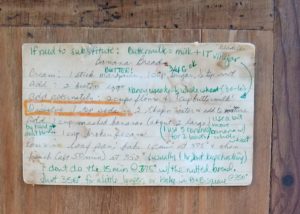