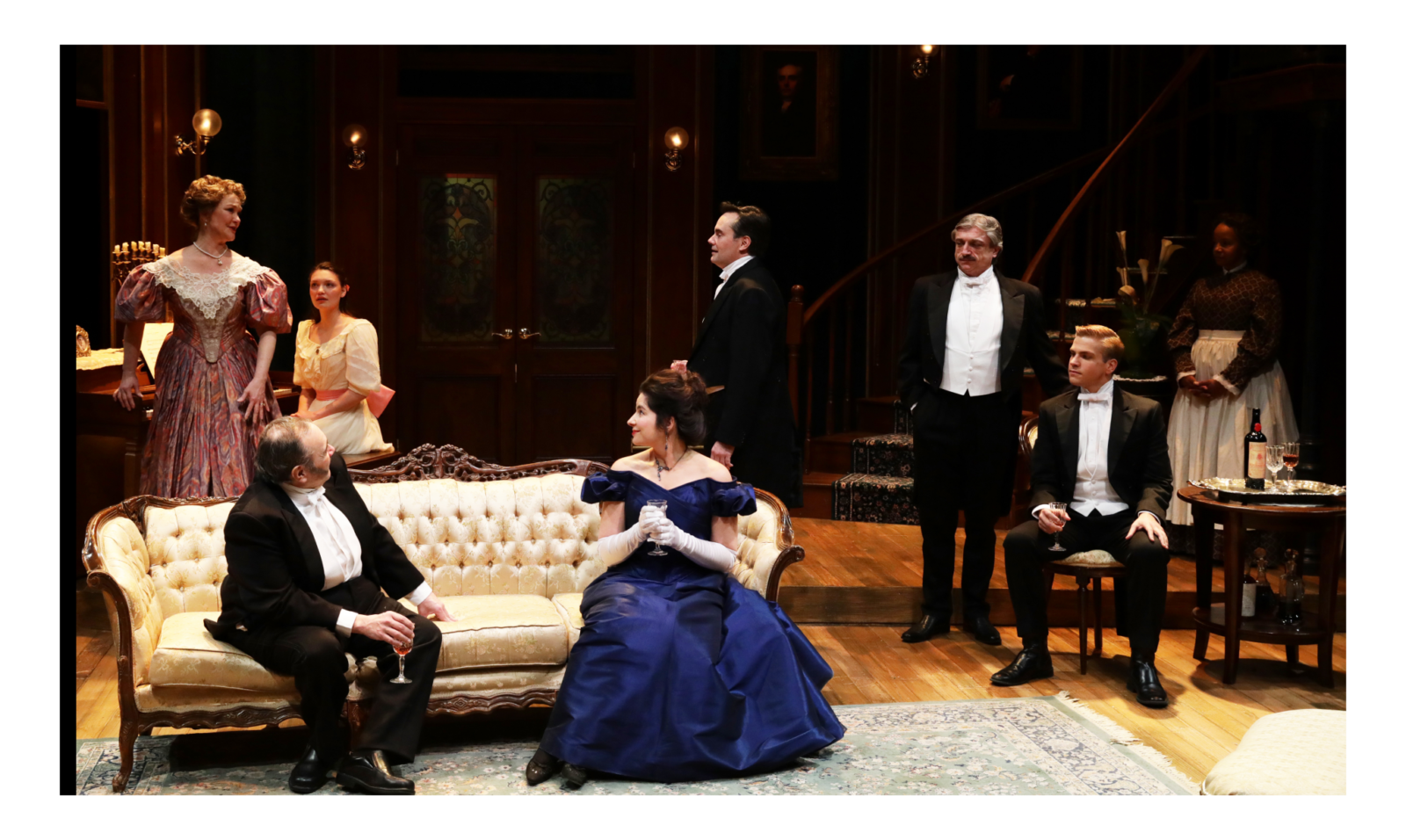 If I had to sum up Lyric Stage’s version of The Little Foxes in a few words, it would be “Surprisingly good for a mostly out-of-date play.” However, my job is not to sum it up in so few words, but to provide a still-brief review.

The Little Foxes is a 1939 play by Lillian Hellman, of which follows a southern family and their squabble over money. It’s central conflict is that of a business deal—the Hubbard siblings are trying to secure an arrangement with a businessman from Chicago (William Marshall, performed by Bill Mootos); within their attempts of closing the deal, there is manipulation, stealing, a planned-and-incestuous marriage, and more that I simply cannot say. The only real reason this is interesting is the main character, Regina Giddens (played by Annie Gottlieb), the sister to the two Hubbard brothers (Benjamin and Oscar, performed by Remo Airaidi and Will McGarrahan).

At its time, The Little Foxes provided important commentary on gender, class, age, race, and the family unit. Regina is an interesting female character who is allowed to be power hungry, manipulative, caring towards her daughter, hateful towards her husband (Horace Giddens, performed by Craig Mathers), and the main character. She’s contrasted against her sister-in-law, Birdie Hubbard (played by Amelia Broome), an emotional and eager-to-please wife and mother to an abusive husband and a terrible son (Leo Hubbard, performed by Michael John Ciszewski). Both women interact heavily with the men, the African American “help” (Addie and Cal, performed by Cheryl D Singleton and Kinson Theodoris) and Regina’s daughter, Alexandra Giddens (played by Rosa Procaccino). This all gives us an objective look at the women’s interaction with people in higher and lower positions of power, and would have been a truly revolutionary piece of art at its release.

Unfortunately, today, it is merely a 150 minute long southern soap that doesn’t push either the “drama” or the “political” envelope.

To Lyric Stage’s credit, they did a good job with what they were given. Director, Scott Edmiston, chose to respect the history of the play and kept it largely in its original form. There is a convincing argument to be made of the importance of maintaining historical works, it’s the one that Edmiston makes in the playbill, “Eighty years after the premier of The Little Foxes, Lillian Hellman remains an admired, controversial, and polarizing literary figure.” With such a take, they succeeded. The set design (by Janie E. Howland) was luxurious and took the audience to the plantation-style house of the era. The costuming (by Gail Astrid Buckley) was lovely and dramatic—as stiff looking and restrictive to the women as the social norms were. The acting was applaudable, the southern accents were good enough that they had me reminiscing on the inflections my Tennessean grandmother used.

So really, the only fault of Lyric Stage was the simple choice to run the play—a play that seemed to only keep the attention of those who could actually remember the time period it was set in.

Today, I would argue that there are far more important plays to be showcasing. As I’ve already mentioned, there is much to be said for showcasing history—particularly that of an often overlooked woman—but I left the performance feeling underwhelmed and unmoved. There were many important issues touched on, but only the topic of gender inequality felt fully developed. None of the characters were particularly likeable, and the ones who were hateable felt flat and uninteresting in comparison to some of the present days’ dynamic hero/villain relationships. I think, if it were to make a true impact in the midst of the current political environment, it would need a heavy updating.

The Little Foxes was vaguely enjoyable in the premise of feeling cultured for an afternoon and good about supporting a female playwright; the actors garnered a few laughs and a round of applause after each scene, but there was very little to be truly impressed by. Maybe that’s really a commentary on the overload of violence and information we’re met with on a day-to-day basis, but that’s an article for another day. For now, take yourself to see The Little Foxes if there’s nothing more provocative to choose, or if you want to watch the American version of “Downton Abbey” in play format.